I got up this morning with a whole plan.  Today was the first day in good 'ol WI that was supposed to be almost 60 degrees and spring like.  I had the whole day planned out.  Morning family run which has not happened enough since my little man arrived.  Then a nap for my baby, some cleaning for me, and an afternoon trip to the zoo where we would then return and grill out.  Perfect day.

This did not happen.  I woke up walked outside to see how it was and it was sooooo windy I almost blew off the sidewalk.  Not to mention the wind was bitter cold.  WHAT THE HELL??!?!?  Us WI people need some nice weather!  This winter has been hangin' around way to long.

I admit to being cranky about this.  A little put out.  I thought ok lets make the best of it.  So little man and dear husband and I went outside attempting to find a side of the house that was slightly less windy.  My son promptly fell in the garage and got a bloody nose.  Parenting fail.  He is just learning to walk and is pretty unsteady at times and I was right next to him, but not quick enough.  I still feel bad.

I laid him down for his nap after cleaning and cuddling him for a while.  I sat at the table and cursed the weather.  An hour later I walked outside and it was slightly less windy and much warmer.  I thought ya know what lets try this again. 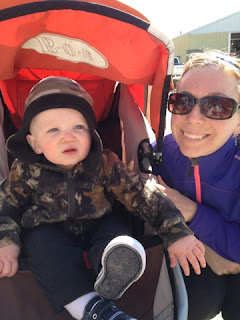 Despite the attempting to get out of the jogger he had a blast and it was nice to get out with our dog as a family.  We stopped at the farm, and little man got the enjoy a tractor ride.
Now we are going to grill out.  Things didn't turn out so bad after all.  I just needed to pull it together and make whatever situation arises work for my little family.  I'm so lucky that I realized it before wasting a whole day.
Posted by Unknown at 2:05 PM 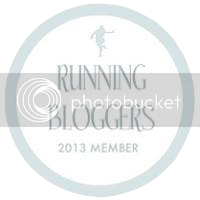